Both of my kids have summer birthdays.  My son turned three this summer.  I asked my son to pick a theme for his third birthday party -- he said,  "T-Rex driving a wee-wee party."

A wee-wee is not what you might think it is -- it is the sound a firetruck makes -- weeweeweewee.  Hence he calls firetrucks wee-wees -- makes sense doesn't it -- almost a convincing argument to change the name of firetrucks to wee-wees.

Anyway back to the theme dilemma.  I told him to pick ONE theme either T-Rex or firetrucks.  He is obsessed with both.  He said, "I want a T-Rex driving a wee-wee party." I let it go- we had all summer to figure it out.  And during the weeks leading up to his party every once in awhile I would ask him about his upcoming party, and he would always say --- T-Rex driving a wee-wee party.  I looked online, and if it is sold.... it is sold online,  they don't make party plates with that particular theme.  Shocking right?  Then I came up with a reason we couldn't have the party --- a reason even a three year could understand.  I simply told him a T-Rex is too big to drive a wee-wee.  He calmly went over to one of his many firetrucks and took one of his many T-Rex toys and placed the small T-Rex in the firetruck's cab and said,"T-Rex driving a wee-wee."  I couldn't fight him anymore.  It was clear what his expectations were for this party.  It was going to be a T-Rex driving a wee-wee "firetruck" party. I made the firetruck and placed small T-Rex statues on the cake.  It was as close as I could get to his three year old request. 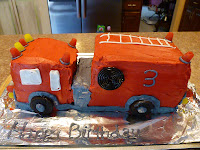 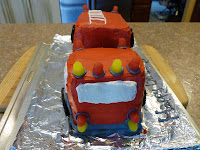 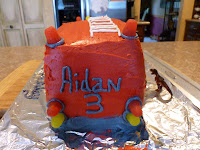 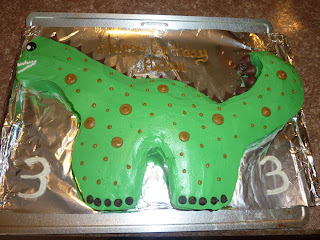 I also had a small play date birthday party for him with a few of his friends.  The birthday cake I made for  him for that day was a T-Rex. I cannot wait to hear what he wants next year.  You have to love how kids think.
Posted by Christine at 7:40 AM