August 8th is National Zucchini Day (aka "sneak a zucchini on your friend's porch day"); this day was established by Tom Roy a Pennsylvanian who thought it was a good way to spread out the overwhelming amounts of squash being harvested at this time of year.  Tom Roy wanted to encourage the sharing of the overzealous vegetable crop.

"Sneak a Zucchini on your Friend's Porch Day" was a big success this year for my family.  My son is almost four and my daughter is two; they really got into it this year.  Aidan wanted to make a pirate zucchini man.  Which was not a big surprise, since he has been dressing up as a pirate at least twice a week since last September when Target starting selling Halloween costumes, and I bought his pirate costume.  He has actually gotten to the point of introducing himself as Pirate Aidan, Arrrrrr.  And it is always at that point where I happily say, "yes, my son is a pirate." And my daughter decided she wanted a Mee Mee (aka to the rest of the world as Minnie Mouse) zucchini girl. So the three of us were off to crafting a pirate and a Minnie.

We put a pirate scarf on one and Mee Mee (Minnie) ears on the other one. A sword and a couple of sets of eyes and we had accomplished our task; they turned out adorable. It was time to make the zucchini bread. This is the recipe I used; I found it on www.allrecipes.com. It had all sorts of great reviews, so I thought I would give it a try. The only tweek I made was adding some nutmeg. I cannot make a recipe without adding something. Nutmeg was an easy no-brainer to add. I have to say the zuuchini bread turned out moist and yummy; I would make it again.

Mix all dry ingredients in a bowl: flour, salt, baking soda, baking powder, cinnamon, nutmeg, sugar and nuts.  Mix all wet ingredients: zucchini, eggs, oil, and vanilla.  Mix wet and dry just until combined.  Place batter into greased and floured pans.  This will either make 2 loaf pans or 4 mini loaf pans. Bake at 325 for 40 - 60  minutes.  I made 4 mini loaf pans and it took 55 minutes.  They turned out perfect.

Back to the Zucchini Day... 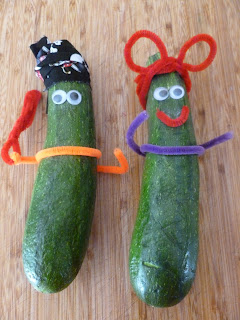 My kids were so cute as they creeped up our neighbor's driveway to leave Pirate Zucchini, Ms. Minnie Zucchini, and the mini zucchini bread.  They were very proud of themselves as they ran back to the car.  The only glich in our plan was my daughter; she started to run back to the car with her beloved Minnie Zucchini still in her tight little grasp.  I had to pry it out of her hot little hands.  A few hours later, our neighbor, my kids call her Ms. Dawn, called to say she knew only two little kids who would leave a little pirate and Minnie zucchini on her front porch.  The kids laughed with delight as she teased them and told them how much she appreciated the squash people and the zucchini bread.

Another successful year celebrating August 8th, Zucchini Day.  But it's not about the silly "National Holiday;" that is just my excuse today.  It is about creating traditions and memories with my children who have stolen my heart and soul and filled them with love.  I adore spending time with them; and on that note, I'm closing the laptop so I can go and play with them. 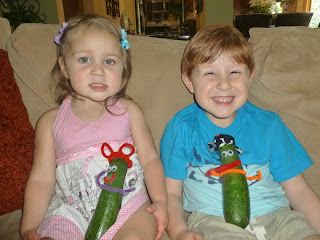 Posted by Christine at 3:36 PM