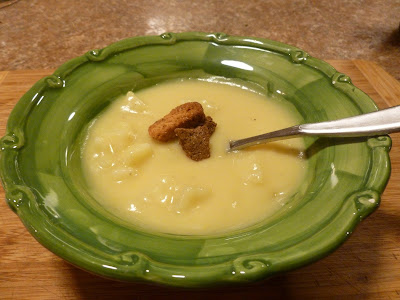 In the bottom of a stock pot, add 3 tablespoons of butter, onions, salt and pepper on low to med heat. Once onions are softened, add potatoes (* hint they should all be about the same size), chicken stock, water, bullion, a bit of salt and pepper.  Let potatoes cook -- about 20 minutes.  Then when potatoes are cooked, pull some potatoes out and cut into bite size chunks - leave them out of the pot. Use your immersion blend to blend soup (cream). Start out with 1 tablespoon of cornstarch in a mug with some cold tap water - not a lot - just enough to dissolve the cornstarch. Mix together until there are no lumps.  Slowly add mixture back into boiling soup (soup must be boiling or you will get lumps).   Add cheese chunks, a splash of half and half (if you don't have this in your house -- forget it -- you will not miss it).  If it is not to the thickness you like, repeat cornstarch step. Add potatoes back in the soup.  Serve. If you want, you can add a bit of fresh chives to the top of the soup in each serving bowl -- and/ or a few chunks of crusty toasty hard bread.  Enjoy your no cream cream soup.
Posted by Christine at 4:11 PM