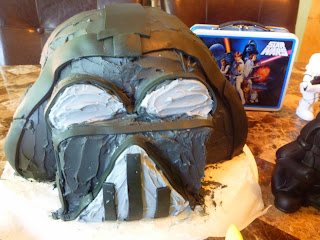 My baby boy turned 5 years old.  He is into Star Wars, the original Star Wars with Luke, Han Solo, Princess Leah, and Chewy. And he just loves Darth Vader.  Because when you are little and innocent, you only see and understand what you know to be true.  So he says that Darth Vader is a good daddy. Because he only knows a world where daddies are good.  So he focuses on that last scene when Vader stops the Emperor from electric shocking Luke, his son.  Hence..... Darth Vader is a good daddy.

Aidan immediately said, "oh, no Mommy I want the head to be a real sized head sitting on the table."
To which I responded, "you mean 3D?"
Aidan said," no not 3D.... I want Darth Vader... with his black helmet."
I said,"That is 3D .... that mean a 3 dimensional head." And I showed him with my hands what I meant.
Aidan was excited and his head started shaking up and down, "yes, that is what I mean a 3D Darth Vader."

He was satisfied that I understood my challenge, and he walked away telling me he couldn't wait to see his cake.  It felt a bit like a mob boss scene from a movie.  He set up the difficult challenge, and he walked away with confidence that the task he requested would meet the requirements he set forth. I was a bit sick to my stomach.  I was pretty sure this was going to be the first birthday cake I was not going to be able to make.

I did a bit of research on the internet.  All the 3D Vader heads I found were covered in black fondant, because it gives the cake that smooth perfect finished look.  The only problem is my family loves the frosting I make.  This frosting is amazing; it is not my recipe it is my dear friend Ilene's (Lene's) recipe.  She has used this recipe for year for all of her kid's birthday cakes.  As only Ilene would say, " this recipe is ancient."  Trust me that is exactly what she would say.  And I feel so fortunate that she shared this perfect recipe with me.  So thank you Lene.  Once you make this frosting, it would be totally appropriate for you to say "thank you Ilene"  aloud in your kitchen.  And when I say amazing.... that is only because I cannot think of another more spectacular word to use.

Here is the recipe for

Cream shortening and butter until smooth.  Add sugar and cream again.  Add milk slowly and extract - beat on high for 5 minutes.  Frost or store in airtight container in the refrigerator.  Whip again before using.

I use this frosting to frost well, anything that needs frosting.  I dye it to suit my needs.  And for this cake I needed a little to be dark grey and a lot to be black. My mom found some dark black Wilton gel icing color.  It was perfect.  It didn't turn that typical grey color.  The frosting turned a beautiful strong black color.

Now back to my cake problem.  It seemed to me that I had two main problems.  First issue was making the actual cake --- carving and putting together a head.  The second problem was this fondant issue.  I don't know how to use it, and even if I did -- I want to use the AMAZING ILENE frosting.  In in the end, I knew if I failed I would have to submit to the local bakery and admit my son had pushed and found the end of my cake design talents.  But until I reached the end and realized I was defeated by Darth Vader, I was going to try to make this cake for my boy.  I mean if Aidan believed I could make this cake, why couldn't I have that kind of confidence in myself.

As far as the cake is concerned, I made a lot of cake for this one.  I made three 9 inch rounds, one 7 inch round, one bowl (for the top of the head), and one small ramekin (to cut in half for the eyes). Once all the cakes were made and cooled.  I put all the cakes in the freezer for an hour.  I needed them to be harder before I started cutting into them.

I put two of the 9 inch rounds on the bottom.  Then I put the 7 inch round on top of those two cakes, and I finished the top of the cake with the bowl. I used the last of the 9 inch rounds for spare parts.  I cut a small rectangle from the 9 inch round to make Vader's breathing apparatus / mouth piece on his helmet.  Then I cut about a 1/4 of an inch out of the depth of the rectangle to make the the two triangles on the sides of that breathing apparatus.  I tried to stick to shapes I know in order to create the helmet -- rectangles, triangles, and semicircles.  I cut the little ramekin in half and used those semicircles to make Vader's eyes.  I cut two curved pieces out of the remaining cake and attached it to the side of Vader's helmet (like where ears would be).  This was supposed to be the curve or flared out part of Vader's helmet.  Let me tell you, it looked rough before I put the crumb coat (think layer of frosting) all over the cake.

Lastly, I put a crumb coat (thin coat of frosting) all over the cake. 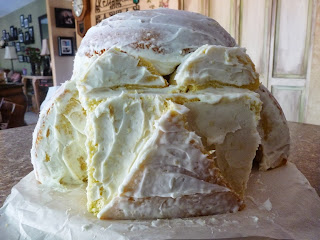 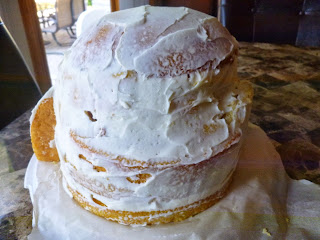 This is what it looked like with just a crumb coat of frosting.  A bit rough looking, but I had faith that once the black frosting was on and all the details were in place it would look like Darth Vader. Once the crumb coat was on, I put it in the refrigerator for an hour.

Now it was time to put the black frosting on.  I had to triple the above recipe.  For past cakes, I have only had to double the recipe, but Darth required a lot of frosting.  Once I frosted the cake, it was time to add some details.  My mom went out an bought me black fondant, which worked perfectly.  I was skeptical about using it since I never had used it before.  I figured I wouldn't be able to use it since I had no experience.  I was wrong, it was easy to work with -- well, for the small quantity I used, it was easy.  I used it to put details -- lines of definition on the mask, and for that purpose it was perfect and easy for a beginner.  I highly recommend trying it for details on your cakes.  I am so glad my mom bought the fondant because I wouldn't have, and in the end the details made the cake look so much better.  Thanks mom.

When my little boy saw the cake, he covered his happy smile with his perfect little hands, screamed in delight, and immediately said,"it is perfect, thank you Mommy." 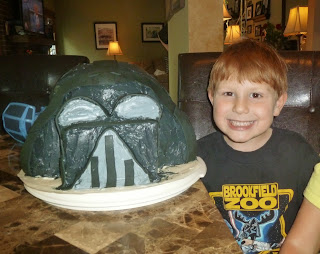 Even when you think your child's expectations of you are too high, start reaching even higher. Happy Birthday Aidan, you are a Blessing.

Posted by Christine at 11:18 AM No comments: